ICUV is a collaboration of expert ukrainian NGOs joined with common goal - advocate victory as it must be of Ukraine in Russian-Ukrainian war.
9 years of russian genocide against Ukraine
How we see ukrainian victory
What Ukraine needs for victory?
Our board members Hanna Hopko
Chairwoman of the National Interests Advocacy Network "ANTS"
In 2014-2019, Chair of the FA Committee of the Ukrainian Parliament (first as a representative of Self-Reliance party, then as an independent MP). In 2014, Foreign Policy magazine named Hanna a "leading global thinker." The same year, she received the "Certificate of Merit" from Georgetown University's Leadership Seminar and was honoured with the National Democratic Institute Democracy Award for promoting democracy in Ukraine. In 2019, she spoke at the Canadian NATO Parliamentary Association forum and the Ukraine Reform Conference in Toronto. Hanna is part of the Leader Youth Network at the World Economic Forum and Munich Security Conference. She's a Member of the International Advisory Council of the Warsaw Security Forum. Olena Halushka
Board member at the Anticorruption Action Centre | AntAC
Olena is a board member of the Ukrainian NGO “Anti-corruption Action Center”. Earlier, she worked as a chief of international advocacy at the post-Maydan coalition of 80 CSOs “Reanimation Package of Reforms” (2015-2017). She advised to the Member of Parliament of Ukraine (2012-2014). Olena has experience in local-level politics as she served as the Kyiv City Council member, and deputy chair of the Council’s Commission on Housing and Energy (2014-2015). Olena is a contributor to the Atlantic Council and KyivPost. She also wrote op-eds for the Washington Post, the Foreign Policy, and the EU Observer. Olena Halushka obtained PhD in International Economics from the Kyiv National University in 2016. Daria Kaleniuk
Executive director of the Anticorruption Action Centre | AntAC
Co-founder and executive director of the Anti-Corruption Action Center, a powerful national organization that has shaped Ukraine's anti-corruption and judicial reforms. Daria's organization ensured that Ukraine has adopted and implemented strong anti-corruption legislation, including the laws on the National Anti-Corruption Bureau of Ukraine, the Special Anti-corruption Prosecutor’s office, the High Anti-corruption Court, the High Council of Justice, open property registers and electronic asset declarations. Daria has also founded critical resources to track money laundering and corruption internationally. Daria holds an LL.M degree in Financial Service Law from Chicago-Kent College of Law. She was recognized as one of the top 100 most successful women in Ukraine by Novoye Vremya magazine, as well as the top 30 under 30 leaders by Kyivpost in 2016. Daria is a member of Young Global Leaders and Munich Young Leaders networks. Since Russia's large-scale war launched against Ukraine on February 24, 2022, jointly with other civil society leaders from Ukraine Daria co-founded the International Centre of Ukrainian Victory (ICUV) headquartered in Poland. Olga Aivazovska
Head of the Board of the Civil Network OPORA NGO
Ms. Aivazovska was a director of national, non-partisan observation missions in Ukraine with over 25,000 activists involved from 2010 to 2020 and participated in electoral observation in more than ten countries of Europe. Represented Ukraine in the political subgroup of the Trilateral Contact Group (Ukraine-Russia-OSCE), settling the conflict in Eastern Ukraine (2016-2018), and the Head of the Board of GNDEM. Was included in the top 100 most influential and most successful women of Ukraine in 2014-2021 (according to political editions of the Focus magazine and the Novoe Vremia). Olga often participates in political TV programs and publishes articles and information materials on electoral legislation reform and the advancement of democracy. Olga Aivazovska is an alumnus of the Draper Hills Summer Fellowship on Democracy and Development Program at Stanford and the Ukrainian school of political studies.
Our activity

We, as representatives of civil society, call on the Western governments to form a coalition and supply as soon as possible Western tanks for Ukraine, including, Leopard 2 tanks which are in mass use in Europe. A declaration and decision to supply Ukraine with battle tanks would encourage other countries to share their tanks too. We're calling upon you to show a new level of solidarity with Ukraine following the Russian constant escalation. Last year, the ICUV team Hanna Hopko and Daria Kaleniuk visited Taiwan, where they had a series of meetings, including with the President of the Republic of China (Taiwan) Tsai Ing-wen and the Minister of Foreign Affairs, Joseph Wu.
As a result, Ukraine received from Taiwan aid in the amount of $1 million for the reconstruction of Kherson and Mykolaiv regions. Ukraine’s critical energy assets need a serious and fast recovery promptly. This means the need for an urgent supply of autotransformers of 750kV and 330kV and other energy equipment.

Last but not least, we call on all democratic states to recognize Russia as a state sponsor of terrorism, as their ongoing terror campaign against peaceful Ukrainians should be named appropriately.

Ukraine’s humanitarian disaster today will turn into a horror for the whole of Europe tomorrow. 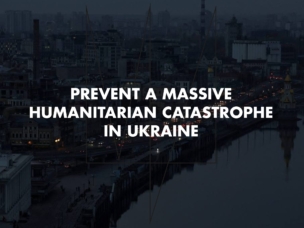